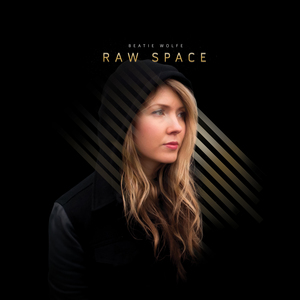 A musical innovator as much as a musician, Beatie Wolfe is at the forefront of pioneering new formats for music, reuniting tangibility, storytelling & ceremony to the album in this digital age. In this vein, Wolfe has created a series of world’s-first designs that bridge the tangible and digital, including ...

a 3D vinyl for the iPhone, an intelligent album deck of cards and a musical jacket - designed by the tailor who dressed Bowie, Jagger and Hendrix, and cut from fabric woven with Wolfe’s music. Beatie Wolfe’s work has been featured in the world’s leading museums, festivals, and received nominations across the music, tech and art fields. Wolfe is also the co-founder of a “profound” (The Times) new research project looking at the power of music for people living with dementia.

How did the project come about?

I am a great lover of the stories of albums, the tangibility of records and the ceremony of listening. From the time I started writing songs as a kid (age 8) and discovered my parent’s record collection, I saw records as musical books, with the artwork providing the perfect backdrop for the music, and I loved opening them up and entering into the world of the album. There was also an absolute sense of ceremony to the occasion. From that point, I was imagining what my album would look like it, what it would feel like, as much as what it would sound like.

When it was time for my first album to be released, it was a very different era with the digital replacing the tangible. So I thought about how to reconnect the two. I saw technology as a way of reintroducing tangibility, storytelling and ceremony to the album, while also making it exciting and new for today’s generation. Raw Space touches on these themes I’ve been exploring since my first album but in perhaps the most extreme and technicolour way. For this album, it began with a question. What would the anti-stream of today look like?

With streaming as the main model of listening to music, and with it missing out so much of the album’s art, story, and a sense of ceremony to the listening experience, I kept thinking about what streaming music could be, how it could celebrate the world of the album — it's artwork, arc, narrative, music — in a fully immersive and multi-sensory way and place the listener at the centre of this dynamic and rich world.

At the time of me thinking about this anti-stream idea, I was onsite at Bell Labs, working on the human digital orchestra performance. In between rehearsals, one of the engineers asked if I would like to visit the anechoic chamber. He warned me about staying in there too long as people found it disturbing or nauseating. However I had the opposite response. I found the room to be deeply peaceful, hugely inspiring (knowing of its rich history, key experiments, breakthrough discoveries) and I also saw it as the ultimate representation of ceremony - a kind of temple for sound.

It instantly connected in my mind with this notion of the anti-stream, and I loved the idea of launching this anti-stream from the anti-echo chamber, which has the effect of instilling a sense of ceremony into this experience, quieting the noise around, and allowing the listener to hear the true sound of sound.

I kept developing this anti-stream or “Fantasia” idea and eventually described the ‘Raw Space’ vision to Marcus, president of Nokia Bell Labs, and he got behind it immediately.

How did you create the music for this experience?

After the magical impression of being in the chamber, the process was one of curating the right music for the story and idea. Like with Montagu Square, it was more about curation rather than creation. One track on ‘Raw Space’ is one I’ve developing for 10 yrs, and another I wrote very recently. I find songwriting to be the most natural process for me, and because of that I always have a bank of songs to draw upon. So with ’Raw Space’ I was conscious to choose songs that ran together coherently, but also took the listener to very different places both emotively and visually.

The music is at the heart of it, but the project and the music are in dialog. Each song has its inherent story, and I find it’s about using the arrangements to bring out the song’s story. So I didn’t do anything as literal as trying to create sound in the studio to accommodate future visuals, but wanted to remain true to the songs and their stories. However, because the emphasis is such a visual and atmospheric one, I did think, especially in the mixing process, about where we could expand the atmosphere, soundscape, and really create the feeling of those changing moods, spaces and landscapes inherent within the song. In the ‘Raw Space’ 360 experience, you’re also hearing things more in the round, not in a flat way and so that was definitely a part of my consciousness. On “Pure Being,” for example, the drums feel very distant, and the placement of the instruments: double bass, electric guitar creates the sense of a big dark space. I thought a lot about the atmosphere you can achieve with small musical details like high pitched electric guitar sprangs, white noise and crickets, more than I have before.

My passion for songwriting continues to draw on the raw and complex emotions of the human condition and the poetry and tragedy of relationships so my album retains a classic and “live" feel, also echoed in the non-synthesised instrumentation, which I think provides a nice contrast to the high tech and art presentation.

Will there be a live performance component to Raw Space?

Yes, on May 1 and 2, for the press unveil there will be a unique live performance for ‘Raw Space’. In addition to the audience being first to experience the album stream, I’ll also be giving a live first-of-its-kind AR performance in the anechoic chamber, where the audience will watch me activate this “Fantasia” effect, with the lyrics and artworks coming to life around me and as I perform purely anechoic.

Then on May 5, the global ‘Raw Space’ experience launches: this will be a modern day 360˚ “Fantasia” experience for the album, streaming in real-time from Bell Labs’ anechoic chamber continuously for a week. The ‘Raw Space’ experience will work on any device: smart phones, tablets, YouTube or a VR headset. Viewers can use the gyroscope on their smartphone/tablet, for example, to explore the chamber as the visuals are surrounding them, or use a VR headset for a more immersive experience and with headphones they’ll hear the ambisonic audio.

How did you work with Design I/O to create the visual iteration of this music?

The first conversation was how to create the feeling of all of the artwork, currently left out of the streaming experience, being brought back into play in a truly captivating and transportive way, unlike anyone has seen before. In my mind, the process of opening up a vinyl and looking at the artwork, lyrics, liner notes created the perfect backdrop for listening to the music and so with ‘Raw Space’ the idea was to take this one step further with the artwork flying off the record as it played, surrounding the listener/viewer, and transporting them into the world of each particular song.

I have worked with Design I/O before, as they built the 3D interactive vinyl for my first album 8ight. There’s always been a kinship there, from a music and design perspective, and that pre-existing relationship has given us the depth and breadth to explore things we started thinking about five years ago.

Once I knew the tracks that would become Raw Space, we got together and I played through the songs acoustically. Then we had a really natural dialogue. Some of the visuals came from very detailed descriptions of what I saw — a Dali-like desert, with a surreal landscape plain, a Giacometti character, crows overhead. Or I would tell them, for example, that with a particularly lush string swell, I saw trees growing. And there were some songs where they had really specific ideas, though we never had wildly different interpretations. Whoever had the more detailed view, fleshed out the impression. Some of the visual ideas were very abstract, and yet beautifully expressive and emotive, and that’s really the territory and magic of Design I/O. Some songs feature very minimal elements, and some big dramatic, extreme moments. I love the beauty of their work. They are the best at what they do.